What a whirlwind of a year! I can’t predict what the Black Sox Scandal‘s bicentennial is going to bring 100 years from now, but it’s sure going to be hard to top all the fun we had in 2019.

Perhaps we’ll have a few more answers to the questions we’ve been asking all year long. Hopefully our modern research still will be studied — and questioned and updated — by future historians. Maybe we’ll even have Harry Grabiner’s full diary by then …

No matter what happens, our SABR Black Sox Scandal Committee can look back on what all we accomplished in 2019 with considerable pride.

The bright spotlight for the 100th anniversary turned on as soon as the calendar flipped to January 1 — I received two emails on New Year’s Day asking for information and an interview request about the scandal — and it didn’t let up until weeks after the World Series ended.

From the launch of our Eight Myths Out project to the chart-topping Infamous America podcast series to the upcoming ESPN Backstory documentary, it seems everyone was interested in learning more about the 1919 World Series. And thanks to the hard work of so many committee members — most especially Bill Lamb, Rick Huhn, Bruce Allardice, Bill Felber, and Mike Nola — we were fully prepared for the onslaught of attention from the media and the general public around the world.

Here are some highlights from our incredible Black Sox centennial year:

One hundred years after the fixing of the notorious 1919 World Series, we’re continuing to shed new light on baseball’s darkest hour. SABR’s Eight Myths Out project, which launched on March 19 at SABR.org/eight-myths-out, was a collaborative project produced by members of our committee, intended to correct many common errors and misconceptions about the fixing of the 1919 World Series.

The Eight Myths Out project used groundbreaking research and resources to provide a more complete understanding of what happened a century ago. This included accurate player and team salary information from the 1919 season, legal documents and transcripts from the Black Sox grand jury proceedings and criminal trial, hundreds of interviews with players from the Chicago White Sox and Cincinnati Reds, and newsreel film footage from the 1919 World Series games.

The new Infamous America podcast series on the Black Sox Scandal hit No. 1 on Apple Podcasts’ history charts and more than 250,000 listeners tuned in to hear about the 1919 World Series this summer.

Produced and hosted by Chris Wimmer of Black Barrel Media, Season 2 of the Infamous America series debuted on Wednesday, August 7 with a weekly six-episode narrative arc of the Black Sox Scandal, plus two bonus interviews with myself and Mike Nola of BlackBetsy.com. I worked behind the scenes as a technical adviser with Chris to help shape the story of the 1919 World Series using the best available research. SABR’s Scandal on the South Side book was used as source material and the Black Sox Scandal Research Committee was acknowledged in each episode. Listen to the series on your favorite podcast app or streaming service, or online at BlackBarrelMedia.com.

Our committee also played a huge role in shaping the media narrative of the Black Sox Scandal in 2019, with features and profiles by reporters from across the world, including:

And lest we forget, the very first Black Sox program to appear on air this year: Katie Nolan’s epic retelling of the scandal on Comedy Central’s Drunk History! I was giddy when I learned Eric Edelstein and friends used our SABR Scandal on the South Side book behind the scenes as a resource for the show.

I was also fortunate to be invited on a number of baseball podcasts and radio shows to talk about our committee’s work, including:

From Connecticut to California, I relished every single minute I got to talk about the Black Sox Scandal in person in 2019, and to meet everyone who wanted to learn more:

I also gave talks or interviews via Skype to SABR chapters in Lexington, KY; Toledo, OH; Cleveland, OH; and Rochester, NY; to classes at the University of Alabama, American University, and Arizona State University; and to high school students in Ohio, Massachusetts, and Arizona.

Coming soon! Back in June in San Diego, I was interviewed by Pulitzer Prize-winning investigative reporter Don Van Natta Jr. for an upcoming episode of ESPN’s Backstory documentary series. (Click here to view the trailer.)

The “Banned* For Life” episode on Shoeless Joe Jackson and Pete Rose is scheduled to premiere on Sunday, January 19, 2020, and will be available afterward on the ESPN+ streaming service. 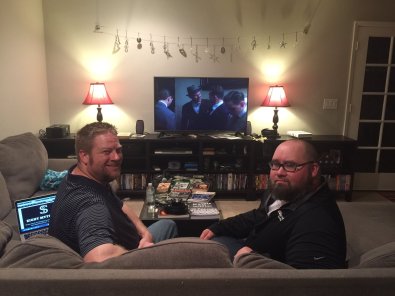 One of the most entertaining experiences I had all year was the impromptu episode of Mystery Science Theater 1919: Eight Men Out that I recorded with my friend Chris Kamka of NBC Sports Chicago during spring training at my home in Arizona.

Over a few boxes of Chicago pizza, we decided to have a little fun and record our commentary as we discussed what the film got right and wrong about the Black Sox, the legacy of Eight Men Out, and the memorable cast of characters on and off the screen.

I learn something new about baseball every time I talk with Chris. It was a blast to hang out with him and talk about this film.

Somewhere in the middle of all this, I found time to write more about the Black Sox Scandal, too. Here is a sampling of my published work in 2019:

All of the attention in 2019 culminated with our spectacular SABR Black Sox Scandal Centennial Symposium at the Chicago History Museum in September — a truly once-in-a-century event!

We had a distinguished lineup of panelists and presenters, including some of the folks listed above along with David Pietrusza, Daniel Nathan, Bill Savage, Susan Dellinger, Michael Haupert, and Kevin Braig, who helped put the story into context and provided insight on our collective understanding of the scandal to a capacity crowd of more than 200 people. Click here to listen to highlights from the symposium at SABR.org.

When you come up with the idea for an event out of thin air and put a year’s worth of planning into it, you just hope the room isn’t empty by the time it arrives. People will come, Ray — and you all certainly did. I got to spend my year with so many of my favorite people and made a bunch of new friends along the way. Thank you all for making this dream come true! 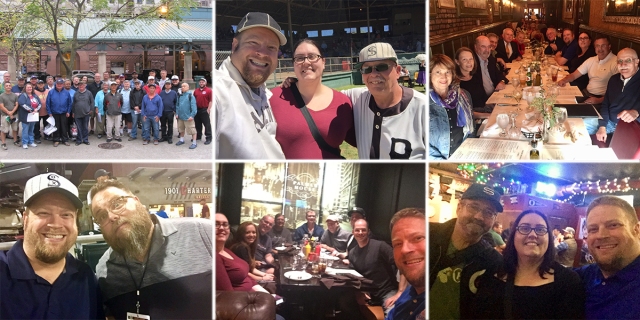 None of this could have been accomplished without a lot of help behind the scenes. Special thanks go out to Erika Johnson, Jessica Trent, Peter Alter, and Julie Wroblewski of the Chicago History Museum; Allie O’Reilly of the Chicago White Sox, Hope Murden of the Palmer House Hilton; Rich Hansen, Richard Smiley, Lorene Kennard, Bill Pearch, and Jason Schwartz of SABR’s Emil Rothe Chicago Chapter; Sarah Wiener for the amazing symposium logo; Mike Noren of Gummy Arts for the illustrated Black Sox baseball cards; Deb Jayne at the SABR office; and especially Tracy Greer for … just about everything else involved with planning and organizing such a wonderful event (and keeping me sane throughout this crazy year!)

It’s a testament to how much people still care about this story 100 years later and how much we’re still learning about the Black Sox Scandal. Of course, we still have a few more big anniversaries coming up, with the grand jury in 2020 and the criminal trial in 2021. But first, let’s take a minute to enjoy this moment. It’s been a fun year!