Note: This essay appeared in the program for the 10th annual Copper City Classic vintage baseball tournament on April 6-7, 2019, in Bisbee, Arizona. The tournament is a fundraiser for the Friends of Warren Ballpark, a local nonprofit dedicated to preserving the historic Warren Ballpark, built in 1909 and considered to be one of the oldest professional ballparks still standing in America. 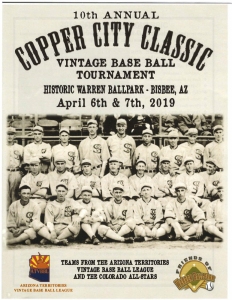 You can feel the ghosts more easily in Bisbee, Arizona, than just about anywhere else in America. The presence of the past is evident as soon as you pass through the tunnel carved into the Mule Mountains that takes you back in time to a town hailed as the “queen of the copper mines.”

You can sense the history in every darkened doorway on Brewery Gulch, in every quaint shop on Main Street, in every trace of minerals left behind by the open mining pits, which closed down decades ago but continue to cast a spell (and a distinctive smell) throughout the area.

Most of all, you can feel the spirit at Warren Ballpark, Bisbee’s century-old baseball stadium and communal gathering space that has played host to generations of ballplayers from Hall of Famers to high schoolers on its dusty diamond.

No team in baseball has more ghosts than the 1919 Chicago White Sox, whose disgraced members once roamed the field in Bisbee. Their restless spirits, borne from a scandal referred to as “the darkest hour” in baseball history, still cast a long shadow over the sport.

Exactly one hundred years ago, eight members of the White Sox conspired to fix the World Series. This shocking revelation about the fall classic shook the “faith of fifty million people” (in the eternal words of F. Scott Fitzgerald in The Great Gatsby) and rocked the game to its core. The Black Sox Scandal damaged the integrity of the national pastime and made pariahs out of its participants, who were banned from professional baseball for life.

In an alternate universe, the Chicago White Sox might have been known as one of the greatest dynasties in baseball history. Led by veterans Shoeless Joe Jackson and Eddie Cicotte, along with up-and-coming stars Happy Felsch and Lefty Williams, the White Sox won the American League pennant in 1917 and 1919 and just barely missed out on two more in 1916 and 1920. They were all set to challenge Babe Ruth and the New York Yankees for AL supremacy in the 1920s.

Instead, Chicago’s championship team was torn apart when fans learned that these four players and four others — collectively known as the Eight Men Out — accepted bribes to throw the 1919 World Series to the Cincinnati Reds. Jackson, Cicotte, Felsch, Williams, Chick Gandil, Swede Risberg, Fred McMullin, and Buck Weaver were immediately suspended from the White Sox. Despite being acquitted of conspiracy charges at a criminal trial a year later, they were never allowed to return to the major leagues again.

We’ll never fully understand why these talented ballplayers threw away their livelihoods for a piece of gamblers’ profits a century ago. Some say they were underpaid and felt disgruntled at team ownership, but we know now that the White Sox had one of the top payrolls in the league and the Black Sox’s salaries were among the highest in the game. Perhaps like many others in baseball’s Deadball Era, a period of rampant corruption where high-ranking officials looked the other way as players openly bet on their own games (both to win and to lose), the Black Sox were just trying to cash in and make some extra money. They never considered the possibility that they’d get caught — or punished if they did.

But they did get caught and they did get punished with a lifetime ban. When the dust finally settled on baseball’s biggest scandal, some of these exiled players found themselves right here in Bisbee, doing the only thing they knew how to do to make a living: playing baseball.

Bisbee’s Warren Ballpark was about as far away from the major leagues as you could be in the first half of the 20th century, when the westernmost teams were located in St. Louis and expansion to the Sonoran desert was still a twinkle in baseball’s eye. In 1925, two of the banished Black Sox players, Buck Weaver and Chick Gandil, showed up in Arizona to play ball. The following year, Lefty Williams joined them, too. The big leagues wouldn’t take them, but the Copper League would. 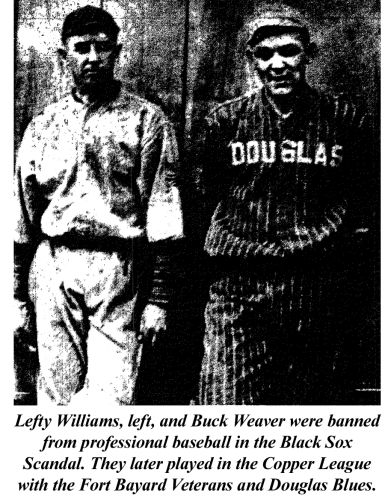 For three unforgettable summers, the Copper League was home to some of the most talented — and most notorious — baseball players who ever lived.

During the era between the world wars, independent professional and semiprofessional baseball flourished all across America. Every town had its own team and as rivalries developed and the competition grew, some towns went to great lengths to ensure their team’s success on the field. Former major-league players learned they could put their skills to good use and still earn a living playing ball.

Because these leagues were outside the realm of Organized Baseball, they could sign anyone who was willing to play ball — even the disgraced Chicago White Sox players who had been banned for life for fixing the 1919 World Series. They were called “outlaw” leagues for this reason.

Between 1925 and 1927, the Copper League — which included teams in Bisbee and Douglas (Arizona), Fort Bayard and Hurley/Santa Rita (New Mexico), El Paso (Texas) and Juarez (Mexico) — enjoyed some of the finest baseball in the country. Their games regularly drew thousands of fans who cheered, and sometimes jeered, for the disgraced former major-leaguers. These baseball outlaws were the best players that anyone in Bisbee or the other Copper League towns had ever seen, and they were popular idols to many who showed up to watch them.

The Copper League had been organized around the turn of the 20th century as a small-time circuit of New Mexican mining company teams, but the lure of using former major-league players soon became overwhelming. The floodgates opened with the signing of Hal Chase, known as the “Black Prince of Baseball,” by the Douglas Blues in 1925. Chase quickly recruited Buck Weaver and Chick Gandil to join him. They were followed by another one of the Black Sox, Lefty Williams, along with Jimmy O’Connell and Tom Seaton. All of them had been banned from professional baseball for gambling-related offenses.

El Paso courted the most famous Black Sox of all, Shoeless Joe Jackson, but the two sides couldn’t agree on terms and Jackson never played in the Copper League. Only Bisbee took a hard line against using “outlaw” players.

Off the field, the league was beset by financial difficulties from the beginning. Most of the teams relied solely on ticket sales and corporate support, and the cost of signing all this high-priced talent proved to exceed the teams’ ability to pay their stars.

After three tumultuous years, the Copper League folded following the 1927 season, shortly before the Great Depression wiped out many similar independent leagues. The Black Sox moved away and continued their outlaw careers elsewhere. But for a brief period, they brought major-league baseball to Bisbee.

A century later, the Copper City Classic takes place on the same field where the Black Sox once played ball. As you sit in Warren Ballpark today and listen to the crack of the bat and the infield chatter while vintage ballplayers re-enact the game as it used to be, keep an eye out for the ghosts of baseball past — the restless spirits who roamed these grounds after they were banished into exile. They paid a steep price for committing baseball’s ultimate sin and their careers turned into dust. But as long as baseball is played here in Bisbee, their memories and their stories will never be forgotten.

Jacob Pomrenke is the Director of Editorial Content for the Society for American Baseball Research and the editor of SABR’s “Scandal on the South Side: The 1919 Chicago White Sox.” He plays Chick Gandil’s old position, first base, for the Phoenix Senators. He’ll try his best not to throw any games in the Copper City Classic. 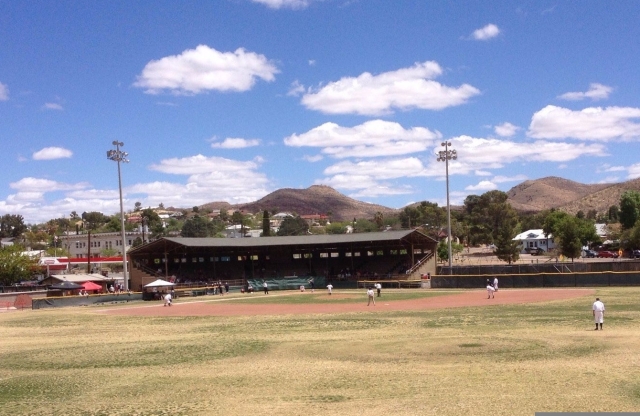 Warren Ballpark in Bisbee, Arizona, circa 2013. High school, amateur, and vintage baseball games are still played on this same field where the banished Black Sox players Buck Weaver, Chick Gandil, and Lefty Williams, and baseball luminaries such as Honus Wagner and Connie Mack once roamed.