Note: This article was originally published at TheNationalPastimeMuseum.com on January 8, 2013, and is reprinted here by permission. 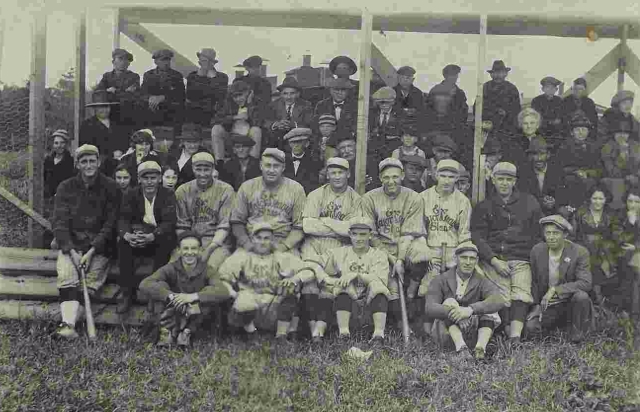 One year after they were banned from Organized Baseball, several Black Sox players embarked on a baseball tour of the Midwest in 1922. Pictured second row, starting fifth from left: Happy Felsch, Buck Weaver, Swede Risberg, and Eddie Cicotte with the “Ex-Major League Stars.” (BlackBetsy.com)

In the final scene of John Sayles’s 1988 film Eight Men Out, Buck Weaver (played by John Cusack) is shown attending a semipro game in Hackensack, New Jersey, where a talented but unknown center fielder called “Brown” (played by D.B. Sweeney) is tearing the cover off the ball. A fan in the stands thinks he has seen Brown before—maybe under his real name of Joseph Jefferson “Shoeless Joe” Jackson, one of the greatest hitters in baseball history. Weaver dismisses the idea with a wistful line: “Nah, those fellas are all gone now.”

That scene, like many in Hollywood films, never happened. But Jackson did play in hundreds of games like that under his own name, not a pseudonym. So did Weaver and the rest of the Black Sox: Swede Risberg, Happy Felsch, Chick Gandil, Eddie Cicotte, Lefty Williams, and Fred McMullin. After they were banished from Major League Baseball for their roles in fixing the 1919 World Series, they fanned out across the country and spent the next decade earning a living the only way they knew how—with bat and glove. They played in big towns and small, before big crowds and small, in Canada and Mexico, hired by ambitious semipro teams for one game or for an entire summer.

This story wasn’t told in Eight Men Out. In Eliot Asinof’s landmark book, the players’ lives after they were expelled from organized ball were largely ignored. The phrases “dropped out of sight,” “quietly vanished,” and “mysterious” were used by writers in the 1930s and ‘40s to describe the Black Sox’s whereabouts. Maybe they should have looked on baseball fields.

When the Black Sox were acquitted by a Chicago jury on August 2, 1921, they were free men for less than 24 hours. The following day, new baseball commissioner Kenesaw Mountain Landis issued his famous decree: “Regardless of the verdict of juries, no player who throws a ballgame, no player that undertakes or promises to throw a ballgame, no player that sits in conference with a bunch of crooked players and gamblers where the ways and means of throwing a game are discussed and does not promptly tell his club about it, will ever play professional baseball.”

The Black Sox, who were between the ages of 26 (Risberg) and 37 (Cicotte), were suddenly left without a means of livelihood. Like most ballplayers of that era and for long afterward, baseball had been their only escape from a harsh life of farming, mining, factory work, or other form of unskilled manual labor. So when faced, again, with a decision about what to do with the rest of their lives, playing baseball whenever and wherever they could get paid to do it seemed like an appealing idea. 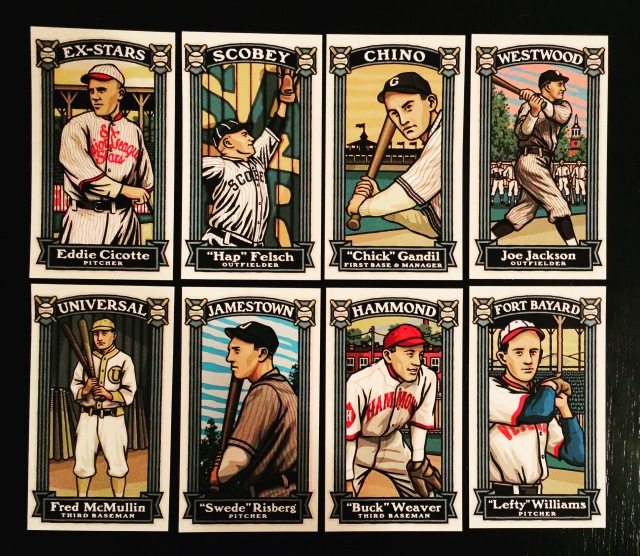 The eight Black Sox players continued playing baseball in independent and “outlaw” leagues throughout the 1920s and ’30s, in places like Scobey, Montana; Hammond, Indiana; and Westwood, New Jersey. These baseball cards were designed and illustrated by SABR member Gary Cieradkowski (studiogaryc.com).

Fortunately, the Black Sox were entering a decade in which independent, amateur, and semipro baseball thrived all across the country. Just about every town in the United States took considerable pride in fielding a competitive team. Some even went so far as to bring in talented ringers to gain an edge in a game against a rival town. That’s where the Black Sox came in.

On September 11, 1921, five weeks after their trial in Chicago ended, Jackson, Cicotte, and Risberg made a surprise appearance at the Macomb Fairgrounds in western Illinois. They had been recruited by a local bootlegger named Kelly Wagle to play for his hometown team of Colchester, a small mining town, against a team from nearby Macomb, the seat of McDonough County.

Wagle had ties to Al Capone and on one of his trips to Chicago’s South Side to acquire alcohol from his supplier, he convinced the exiled Major Leaguers to suit up against Colchester’s top rival in a fiercely contested game that would decide the championship of McDonough County. The Black Sox, who remained out of sight until the game began, easily tipped the scales in Colchester’s favor.

Most individual games were far less lucrative than that—not every town had a big-city benefactor like Kelly Wagle—and the Black Sox quickly learned that the best way to exploit their fame was to announce their intentions in advance. Local newspapers promoted their upcoming games and covered them as if the players were in the Major Leagues again. A typical advertisement read, “Don’t fail to see the famous Joe Jackson in action!” Bigger crowds ensured bigger paydays, even if some of those fans showed up only to boo and heckle. But even that slowed down after a few years as the World Series scandal began to fade from memory.

In 1922, Cicotte, Risberg, Weaver, Felsch, and Williams teamed up for a three-week tour of northern Minnesota’s Iron Range. They called themselves the Ex-Major League Stars and scheduled a series of games against Duluth, Hibbing, Chisholm, and Eveleth. Their opponents weren’t exactly lightweights; Hibbing’s lineup boasted three former Major League players. The tour was well-attended, averaging about 2,500 fans per game, but the Ex-Stars were hampered by mismanagement and indifferent play. Cicotte left the team in mid-June after a clash with Risberg—reportedly, Cicotte demanded his share of the tour money up front and Risberg responded by knocking out two of his teeth. The Ex-Stars won four games and lost eight, then mostly went their separate ways.

In between, Risberg and Felsch spent a summer playing for a well-compensated mining company team in tiny Scobey, Montana near the Canadian border, and picking up games throughout Saskatchewan and Manitoba. Risberg also played a couple of years for the independent Sioux Falls Canaries in South Dakota before opening a tavern and settling in Northern California. Until the Great Depression wiped him out, he was able to support his family well by playing baseball during the warm-weather months and tending to his other businesses (which included, at times, a car agency, a hotel, and a miniature golf course) in the winter.

Jackson continued to play baseball for hire until he was 50. In 1923, he led a team from Americus, Georgia to the “Little World Series” in the independent South Georgia League. He also hooked on with teams from Waycross, Georgia, and his hometown of Greenville, South Carolina, thrilling fans with his smashing line drives and circus catches.

In the mid-1930s, Jackson was player-manager for the Woodside Mill team in Greenville, where his younger brother, Jerry, was the star pitcher. He was a respected baseball figure in South Carolina, serving as the longtime chairman of the Western Carolina Semi-Pro League’s protest board and offering baseball tips to aspiring pro players and neighborhood kids.

In 1925 and ‘26, Weaver and Williams joined their old teammate Gandil, along with other baseball outlaws such as Hal Chase, Tom Seaton, and Jimmy O’Connell in the Copper League—a four-team circuit in the Southwest along both sides of the United States–Mexico border. Chase managed a team in Douglas, Arizona, where Gandil and Weaver played for him. 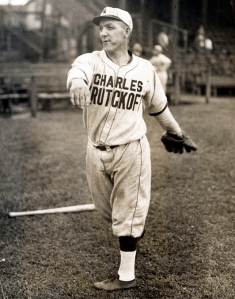 Beginning in 1927 until the mid-1930s, Buck Weaver played independent ball for teams in Chicago sponsored by local businesses. He was a fan favorite everywhere he went. (Author’s collection)

Williams pitched first for Douglas, then jumped to a team in Fort Bayard, New Mexico, playing in a true outlaw league filled with betting on games, excessive drinking and fighting, and other forms of rowdyism. Financial woes plagued the league from the beginning, and it disbanded in 1927. By then, Weaver was back home in Chicago, playing ball in front of fans on the South Side for the first time in seven years. Chicago’s Midwest Association was one of the most competitive semipro leagues in the country, boasting former Major League stars such as former Cubs left-hander Jim “Hippo” Vaughn. Weaver was its most celebrated star and many Buck Weaver Days were held in his honor until he retired in the mid-1930s.

This era of profitable independent baseball did not last long. The successful teams and leagues that survived the harsh Depression years were overwhelmed by World War II and then the introduction of television. Fans no longer gathered at community ballparks on Sunday afternoons to watch the town’s baseball team square off against a neighboring rival. Players whose pro careers were cut short by the war had to go out and find a real job. But the Black Sox were in the right place at the right time, able to capitalize on their skills and their infamy by playing baseball for a living even after they were banished from the Major Leagues.