Note: This article was originally published at TheNationalPastimeMuseum.com on May 29, 2017, and is reprinted here by permission. 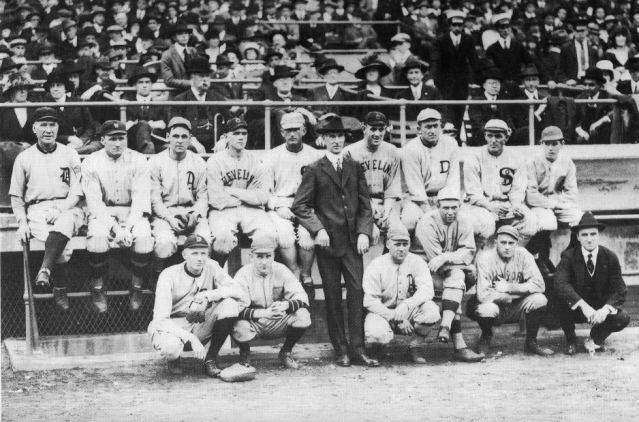 On September 27, 1917, the Chicago White Sox and Washington Senators were scheduled to play a game at Griffith Stadium in Washington. But Walter Johnson, the Senators’ ace pitcher, was nowhere to be found. Neither were Shoeless Joe Jackson and Buck Weaver of the White Sox, who had recently clinched the American League pennant and were preparing for the upcoming World Series.

In Philadelphia, the A’s and St. Louis Browns were set to take the field at Shibe Park that afternoon. But A’s Manager Connie Mack wasn’t in the dugout wearing his familiar suit and waving a scorecard. Neither were catcher Wally Schang or first baseman Stuffy McInnis, veterans of Mack’s first championship dynasty.

Tigers star Ty Cobb wasn’t with his team in Detroit and the Indians’ Tris Speaker wasn’t in Cleveland, either. Why were all of the biggest names in baseball away from their teams entering the final weekend of a long season? They were all at Fenway Park instead—and Tim Murnane, the Boston Globe’s popular sports columnist, was the reason why.

Affectionately known as the “Silver King” for his thick snow-white hair and bushy mustache, along with a pair of striking blue eyes, Murnane had been one of baseball’s most respected figures and colorful personalities when he died at age 65 earlier that year.

Murnane’s roots in the sport went back to the very beginning of the first professional league, the National Association, in the 1870s. The first game he ever attended was the historic contest between the Cincinnati Red Stockings and the Atlantics of Brooklyn on June 14, 1870, when the Red Stockings’ unprecedented 81-game winning streak came to an end.

Murnane’s own Major League playing career began in 1872, when he signed to play for the Middletown (Connecticut) Mansfields. He was a light-hitting but speedy first baseman with a mind for mischief. He led the National Association with 30 stolen bases in 1875, and also gained a measure of fame for a stunt he once pulled as a base runner: hurdling clear over an infielder who was preparing to tag him out. No one present had ever seen such creativity in avoiding a tag before.

He wasn’t one of the best players of his era, but “his booming voice and inspiring personality” helped him make friends everywhere he went. As a member of the Philadelphia Athletics, he participated in Albert Spalding’s baseball tour of Europe in 1874. Two years later, he joined the Boston Red Stockings of the new National League during its inaugural season. Later, he served as a player-manager in the fledging Union Association in 1884. He retired after hitting .261 in parts of eight big league seasons.

Before Murnane embarked on his celebrated second career as a sportswriter, he tried his hand at just about everything else in baseball. He bought a team in the low-level New England League but sold it after one month. He served as an umpire, including on at least one occasion in a National League game. He published a short-lived sports periodical, theBoston Referee, and contributed articles to the New York Clipper. Last but not least, he was a scout for his old teammate Cap Anson of the Chicago White Stockings. (He is credited with the signing of future Hall of Famer Hugh Duffy, among others.)

In 1887, Murnane and John J. Drohan were hired as the first full-time baseball writers at the Boston Globe. Soon afterward, Drohan left and the 36-year-old ex-ballplayer with the thick Irish brogue was placed in charge of the entire sports department. Murnane developed a loyal following with his easy-to-read, opinionated style, and he took advantage of his many relationships around the game to deliver in-depth coverage to his readers. In Boston, baseball was booming and Murnane was there to write about it. In his first six seasons as a beat writer, Boston teams won five championships, albeit in three different leagues: the National League, American Association, and Players’ League.

While Murnane didn’t invent the Globe’s “notes” column, which included news and gossip about players and teams around the league, he took the concept to new heights. His “Gossip on the Game” notebook became a must-read for Boston fans every Sunday—and long after Murnane’s death, the Globe’s Sunday notebook was still a staple of its baseball coverage under the bylines of Harold Kaese, Peter Gammons, Larry Whiteside, Dan Shaughnessy, and many other talented writers into the twenty-first century.

As a former athlete himself, Murnane was one of the few player-friendly voices in the baseball media. He supported the freedom of players to switch teams on their own volition—as he had done several times in the early, freewheeling days of professional baseball—and advocated for the elimination of the reserve clause. He also used his bully pulpit with the Globe to generate interest in the Brotherhood of Professional Baseball Players and its ill-fated Players’ League, which lasted just one season in 1890. At the turn of the twentieth century, Murnane was named to an arbitration board to help settle disputes between Minor League players and team owners. (He was personally invested in the minor leagues, because he supplemented his newspaper income by serving as the president of the New England League from 1892 until 1916.)

It would take all day to list the many jobs Murnane held in baseball. Among his more notable positions was a stint as the vice president of baseball’s governing body, the National Association, and as treasurer of the Baseball Writers’ Association of America, when that group was first formed. Murnane was working right up until the hour of his death, filing his final story just before suffering a fatal heart attack on February 7, 1917, at the Shubert Theatre in Boston.

And despite having worked with virtually everyone associated with baseball for four decades, Murnane had made few enemies. He was invariably described as a “prince” and as the game’s most respected authority and beloved icon. But one thing he had not accumulated during his long life and career was a fortune. He left little in the way of savings to take care of his widow, Mary, and their four children.

Boston Red Sox owner John I. Taylor, the American League, and the BBWAA set up a fund to pay for funeral costs and support the Murnane family and, to help publicize the effort, an All-Star benefit game was organized on Thursday, September 27, at Fenway Park. Just like its namesake, Tim Murnane Day turned into an unforgettable occasion, worthy of remembrance even a century later.

Even though there were four regular-season games scheduled that day, every American League team contributed at least one player to the All-Stars’ formidable roster, which was scheduled to square off in a nine-inning exhibition against a squad selected from the hometown Red Sox, including the young left-hander Babe Ruth, Boston’s starting pitcher for the day.

The All-Stars’ lineup was “the fanciest picked team that ever trotted out from any bench,” led by an outfield of Tris Speaker (Indians), Ty Cobb (Tigers), and Shoeless Joe Jackson (White Sox), three of the greatest all-around hitters in baseball history.

The infield was comprised of Buck Weaver (White Sox), Ray Chapman (Indians), Rabbit Maranville (Braves; the only National Leaguer who showed up), and Stuffy McInnis (A’s). Behind the plate were catchers Wally Schang (A’s) and Steve O’Neill (Indians), and on the mound Walter Johnson (Senators), Urban Shocker (Browns), and Howard Ehmke (Tigers). Tigers Manager Hughie Jennings and A’s skipper Connie Mack were also on hand to coach the All-Stars.

A crowd of 17,119 showed up to Fenway Park on a warm, hazy September afternoon. The game itself was just a sideshow to the many festivities that were organized. Before the game, a “field day” was held in the outfield—a skills competition among the talented athletes gathered there. Shoeless Joe Jackson stood in center field and heaved a baseball 396 feet, eight inches, toward home plate to claim the top distance throw, earning himself an engraved silver bowl that he kept for the rest of his life. Ray Chapman circled the bases in 14 seconds flat to win a speed race. Naturally, Babe Ruth won the long-distance fungo-batting contest with a towering blast of 402 feet. At age 22, he was still a full-time pitcher, with just nine career home runs in the Major Leagues.

In the grandstands, actress Fanny Brice helped sell programs and the Ziegfeld Follies chorus girls collected donations. The humorist Will Rogers made an appearance and so did legendary boxing champion John L. Sullivan, who delighted the crowd by coaching third base while the Red Sox were batting. The benefit proved a rousing success, raising close to $15,000 for the family and helping to pay for a permanent grave marker at the Old Calvary Cemetery in Boston.

“The spirit of the All-Stars was immense,” wrote Burt Whitman of the Boston Herald. “They seemed to get more fun out of the occasion than the fans, yet the ball game was a serious affair with both teams giving their best effort.”

Behind the pitching of Ruth (three singles allowed in five innings) and Rube Foster, the Red Sox shut out the All-Stars, 2–0. Boston’s Duffy Lewis broke a scoreless tie with two outs in the eighth inning with an RBI triple off Walter Johnson to bring home the game’s only runs.

It’s hard to fathom another member of the media who could have brought so many baseball stars together on one day—but that just shows the esteem in which Tim Murnane was held throughout his life. As player, umpire, scout, and executive, he made his mark on every aspect of the game. As editor, publisher, and columnist, he was among the most prolific and influential of his era. In 1978, his fellow baseball writers recognized his lasting impact by selecting him for their highest honor: the J. G. Taylor Spink Award at the Baseball Hall of Fame.