Note: This article was originally published at TheNationalPastimeMuseum.com on April 2, 2018, and is reprinted here by permission. 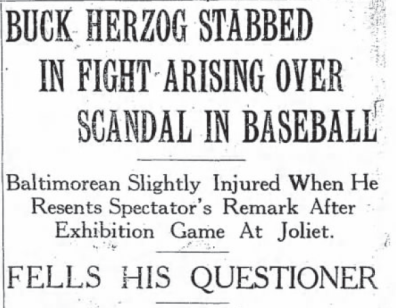 Just days after he was implicated in a baseball bribery scandal, Chicago Cubs infielder Buck Herzog was stabbed by a fan following an exhibition game on September 30, 1920, in Joliet, Illinois. (Newspapers.com)

As the Chicago Cubs walked off the field on September 30, 1920, near the end of a long, losing season, they wanted nothing more than to go home and get some rest.

Suddenly, a voice cried out from the crowd of fans gathered in the parking lot:

“You’re one of those crooked Chicago ballplayers. When are you going to confess?”

Cubs infielder Buck Herzog stared at the man who had just jumped on the running board of his car, stuck his head inside the vehicle, and shouted the accusatory question at him.

Herzog wasn’t one to back down from a fight, having once famously knocked down Ty Cobb in a postgame brawl. And he was sick and tired of being called a crook by fans who might have been confusing him with Buck Weaver, the Chicago White Sox third baseman who had been implicated by his teammates two days earlier in the plot to fix the 1919 World Series. The newspapers were full of reports that Weaver was about to admit his involvement to a grand jury called to investigate gambling in baseball.

Herzog had had enough. He leapt out of the car and began pummeling the man, knocking him into a nearby ditch. Then, a flash of silver sparkled in the sun—a knife—pulled by another man in the crowd, a friend of the first fan. The blade penetrated Herzog’s left hand twice as he raised his arms to protect himself. A third slash tore through his dark blue stockings below the knee.

In an instant, on a chilly fall afternoon in Joliet, Illinois, Buck Herzog was no longer defending his honor. Now the Major League veteran and World Series hero was fighting for his life.

Buck Herzog played in four World Series with the New York Giants before moving on to the Chicago Cubs. Controversy followed him throughout his 13 seasons in the big leagues. (Library of Congress)

In the words of historians Dr. Harold Seymour and Dorothy Seymour Mills, the Black Sox Scandal was “baseball’s darkest hour.” During the final week of the 1920 season, the light of the National Pastime was just beginning to fade. Two days earlier, on September 28, White Sox stars Eddie Cicotte and Shoeless Joe Jackson testified before a Chicago grand jury that they had accepted bribes to throw the World Series. That’s when Buck Weaver’s name came up as a participant in pre-Series meetings to discuss the fix.

Baseball’s carefully cultivated image as a wholesome game was shot to pieces with these shocking revelations of corruption. But there would be a whole lot of collateral damage, and as hard as baseball officials tried to focus the outrage on the eight White Sox involved, players around the game would find themselves shrouded in controversy.

Buck Herzog was no stranger to charges against his integrity. Back in 1911, his manager had accused him of “laying down” and fined him until he forced a trade to the New York Giants, where he thrived under John McGraw, the Hall of Fame skipper who developed a love-hate relationship with his fiery, aggressive third baseman. Herzog helped the Giants win three straight National League pennants and set a long-standing World Series record with 12 hits in the 1912 fall classic.

After Herzog clashed with McGraw a few too many times, he was sent to the Cincinnati Reds and eventually ended up in Chicago at the age of 34 in 1919. The following year, his name came up in connection with rumors that a Cubs-Phillies game had been fixed in August 1920, although no evidence was ever offered that Herzog was involved. That game, not the 1919 World Series, was the reason a Chicago grand jury was convened to investigate baseball’s troubles with betting and bribery. And it wasn’t the last time Herzog’s name would be mentioned in the courtroom. 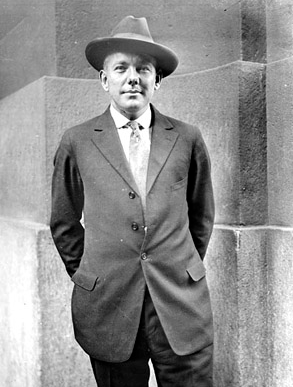 New York Giants pitcher Rube Benton testified to a Chicago grand jury in September 1920 that Cubs infielder Buck Herzog and his Giants teammate Hal Chase had attempted to bribe him before a game in 1919. (Chicago History Museum)

On September 23, New York Giants pitcher Rube Benton was called to the witness stand before the grand jury. Before speaking under oath, Benton delivered a more explosive story to the Chicago Daily Journal, in which he accused the Cubs’ Herzog and Giants teammate Hal Chase—long known as the most corrupt player in baseball—of offering him a bribe to lose a game against the Cubs in 1919.

After Benton refused to take the bribe and won the game, Giants third baseman Heinie Zimmerman (who was also implicated in the bribery scheme) reportedly mocked the pitcher by telling him, “You poor fish. Didn’t you know there was $400 waiting for you to lose the game today?”

When Benton told that story to the grand jury a year later, Herzog angrily denounced it. “Benton’s been telling that mess of trash a long time,” he said to a Chicago Daily Newsreporter. Herzog countered Benton’s claims by accusing the pitcher of benefiting from inside knowledge to profit on the fixed 1919 World Series. He said Benton won nearly $4,000 betting on the Cincinnati Reds thanks to tips from Chase, who had played a liaison role between the White Sox players and the gamblers.

Herzog would be exonerated by National League President John Heydler, who testified that there was no truth to the bribe allegations. “I don’t know what to think about Benton,” Heydler said. “He told many stories . . . his reputation in our league is not the best.”

But Herzog’s reputation was irreparably damaged and, despite support from the league office, his days with the Cubs were numbered. His final appearance in a Major League uniform would come not at Wrigley Field (known at the time as Cubs Park), but 40 miles away in an exhibition game against a semipro club from Joliet.

Buck Herzog, right, seen here with White Sox star Eddie Collins during the 1917 World Series, was exonerated by National League president John Heydler after charges that he had bribed pitcher Rube Benton. But the Chicago Cubs released Herzog and he never played again in the major leagues. (Chicago History Museum)

Back in the early twentieth century, Major League team owners took advantage of rare off-days to schedule lucrative exhibition games against nearby amateur or semipro squads. Players under contract had no choice but to participate, in an era long before collective bargaining agreements.

On September 29, 1920—as the White Sox’s Lefty Williams followed Cicotte and Joe Jackson by confessing to the grand jury in Chicago—the Cubs were playing an exhibition game in Peru, Indiana, with Claude Hendrix pitching a 7–0 shutout against the best nine the tiny town could offer. Earlier that month, the Cubs had played a benefit game in Marion, Ohio, home of then-Senator Warren G. Harding, the Republican candidate in the upcoming presidential election.

Another game was scheduled for September 30 in suburban Joliet. The Cubs’ starting pitcher carried a name fit for the Oval Office: Abraham Lincoln “Link” Bailey, a decorated Army veteran during World War I now in his second season with the Cubs. The Cubs faced a talented semipro team from Joliet with a former big leaguer on the mound. Tom McGuire had come up with the Chicago Whales of the Federal League and also had made one appearance in a tryout with the White Sox in 1919.

McGuire held a Cubs lineup with Herzog, two-time NL home run champ Dave Robertson, and veteran Dode Paskert to four runs on nine hits. During the game, according to the Chicago Tribune, “there was considerable jeering from the crowd and many remarks about the crooked ballplayers. Most of them were directed at Herzog because his name had been prominent in the opening days of the investigation by the grand jury here.”

Herzog ignored the boos and catcalls, pounding out two hits and scoring a run. But in the ninth, Joliet scored two runs off reliever Paul Carter to capture a 5–4 victory over the Major Leaguers. (That result wasn’t as surprising as you might think. Just that same week, the Boston Braves and New York Yankees also lost exhibition games to minor league or semipro opponents. The big leaguers were forced to show up for these games but no one could compel them to always give their best effort.)

After the game ended, Herzog walked off the field and jumped into a vehicle waiting to take him back to Chicago. He wasn’t in the car for very long before a fan poked his head inside and accused him of being “one of those crooked Chicago ballplayers.” Moments later, he was on the ground, nursing his bloody left hand after being stabbed three times.

Thankfully, the wounds were superficial and Herzog wasn’t severely injured in the knife attack, even mustering an attempt to chase after the assailant into the crowd before he escaped. No arrests were made, and his attackers were never publicly identified. The incident was reported in newspapers around the country but quickly forgotten as developments in the Black Sox Scandal continued to dominate headlines.

Back home in Chicago at the Hotel Sherman where he lived, Herzog showed off his bandaged hand and answered questions from reporters about the incident. “I’m sorry it occurred,” he said. “But I couldn’t resist punching that fellow when he called me a crook.”

Herzog did not appear in the Cubs’ game against the St. Louis Cardinals the following day on October 1, or in the team’s final two games after that. In fact, he never appeared in a Major League uniform again. He did travel to Ebbets Field in Brooklyn to watch the World Series and had every expectation of continuing his playing career despite all the storm clouds swirling over his head.

But baseball had moved on, and after years of turning a blind eye toward bribery allegations, the sport’s new authority figure, Commissioner Kenesaw Mountain Landis, advised teams to cut bait with anyone even associated with rumors of fixed games. During the offseason, the Cubs quietly released Herzog and pitcher Paul Carter, whose name had also been connected (without evidence) to the controversial Cubs-Phillies game back in August. Their careers were collateral damage and they faced the same punishment as the Black Sox: They were no longer welcome in Major League Baseball.

Herzog bounced around the minor leagues for a few seasons and later served as the baseball coach at the United States Naval Academy in Annapolis, Maryland. His fortunes spiraled downward, and he was near-destitute when he died of tuberculosis at the age of 68 in 1953. He never considered himself to be a crook, but baseball treated him like one.