Note: An earlier version of this article was originally published at TheNationalPastimeMuseum.com on January 24, 2013, and is reprinted here by permission. 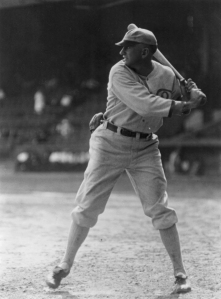 On September 24, 1919, Shoeless Joe Jackson strode to the plate at Chicago’s Comiskey Park in the bottom of the ninth inning with a chance to make history.

The score stood at 5–5 with one out. The winning run—the American League pennant-clinching run—stood on third base in the form of Nemo Leibold. Jackson stepped in to face 20-game winner Allen Sothoron of the St. Louis Browns. The right-handed spitballer was enjoying his finest season, but he was undoubtedly tiring in this ninth-inning jam after having allowed 13 hits. Jackson, Chicago’s powerful cleanup hitter boasting a .349 average, was the last man Sothoron wanted to see.

The Browns had taken a 5–2 lead off White Sox ace Eddie Cicotte after 6½ innings, but the first-place White Sox were the toughest team in the Major Leagues to put away. On 13 previous occasions, they had rallied from a deficit after the seventh inning to win; their propensity to score runs late made them dangerous in any situation.

The Sox had almost tied the game in the seventh, but Eddie Collins, Chicago’s team captain and a future Hall of Famer, was thrown out at the plate on an extremely close play. Collins protested the decision so vigorously that he was ejected by umpire George Hildebrand (or as the Chicago Tribune reported it: “banished from the scrap by a peevish umpire for kicking over a hairline decision”).

Cicotte, seeking his 30th victory, had been battered by the Browns for five runs and was removed for a pinch-hitter in the bottom of the seventh. The 35-year-old veteran with an intoxicating “shine ball” had won six straight starts and even picked up two wins in relief since August 15.

A side note deserves mention here: One of the most compelling scenes in the 1988 film Eight Men Out shows Cicotte (played by David Strathairn) arguing with owner Charles Comiskey (played by Clifton James) about a promised bonus for winning 30 games. Comiskey’s miserliness is given as a reason why Cicotte joined the World Series fix, but later research has shown that bonus was never promised. In fact, Cicotte did have his chances to win 30 games in 1919, including on this Wednesday afternoon in late September. But with the White Sox needing a win to secure their berth in the World Series and with his ace pitcher struggling, manager Kid Gleason decided to replace Cicotte who was down by three runs in the seventh. 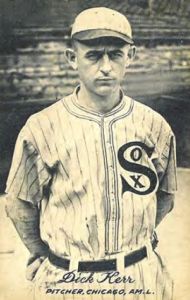 Gleason selected rookie left-hander Dickey Kerr to relieve Cicotte. In that Deadball Era long before bullpen specialization, Kerr was something of a relief ace for the White Sox. In 1919 and ‘20, he compiled an 11–2 record with a 2.80 ERA out of the bullpen. As the White Sox rallied against the St. Louis Browns on Sept. 24, Kerr held his opponents at bay with two scoreless innings.

Meanwhile, the White Sox scored twice against Sothoron in the seventh, cutting the Browns’ lead to 5–4. In the ninth, Kerr led off with a single and moved to third on Leibold’s base hit. Utility infielder Fred McMullin, who had replaced Collins, worked Sothoron for a walk to load the bases. Then Buck Weaver slammed a long sacrifice fly to center field that scored Kerr to tie the game and moved Leibold to third. He was 90 feet away from clinching the pennant, with Jackson due up next.

The White Sox had been alone in first place since July 9, when Jackson scored the go-ahead run in another patented late-inning rally to beat Connie Mack’s Philadelphia Athletics. On September 24, the Sox held a four-game lead over the Cleveland Indians with five left to play. Telegraph reports had already come in to Comiskey Park that the Indians had lost in Detroit, ensuring Chicago at least a share of its second AL pennant in three seasons. A win would send the White Sox to Cincinnati for a World Series matchup with the National League champion Reds.

Jackson came through with a flourish. He took a “vicious swat” at a Sothoron pitch and lined it to deep right-center field. The Chicago Tribune reported the hit would have gone “for two or three bases under ordinary circumstances,” but the White Sox mobbed Jackson after Leibold strolled across home plate with the winning run in a 6-5 White Sox victory.

Never before had an American League team clinched a pennant with a walk-off victory. The feat would not happen again for nearly a quarter-century.

In fact, a walk-off victory to clinch a World Series berth has only happened twenty times in baseball history. In addition to Shoeless Joe Jackson in 1919, here are the others:

• 1903: Claude Ritchey doubled to score Honus Wagner in the 9th as the Pittsburgh Pirates captured the first NL pennant in the World Series era with a 7-6 walkoff victory over the Boston Beaneaters on September 18.

• 1914: George “Possum” Whitted drove in Johnny Evers with a game-winning double in the 9th to clinch the NL pennant for the “Miracle” Boston Braves with a 3-2 win over the Chicago Cubs on September 29.

• 1922: George “High Pockets” Kelly singled in Frankie Frisch with the winning run in the 10th inning as the New York Giants won their second of four consecutive NL pennants with a 5-4 win over the St. Louis Cardinals on September 25.

• 1943: Lou Klein beat out a potential inning-ending double play in the 9th and Ray Sanders scored the winning run from third base as the St. Louis Cardinals clinched the pennant with a 2-1 victory over the Chicago Cubs on September 18.

• 1943: One week later, Bill Dickey clinched the AL pennant for the New York Yankees with a 14th-inning single over second base to score Billy Johnson from second base and a 2-1 win over the St. Louis Browns on September 25.

• 1951: Bobby Thomson’s famous ninth-inning home run off Brooklyn’s Ralph Branca sent the New York Giants to the World Series with a 5-4 win in the third and decisive game of an NL playoff tiebreaker.

• 1957: Henry Aaron of the Milwaukee Braves lined an 11th-inning home run against the St. Louis Cardinals to clinch the NL pennant on September 23, the only other time the feat occurred in the predivisional era.

• 1959: Carl Furillo hit an infield single in the 12th inning and Gil Hodges scored from second base on an errant throw by Felix Mantilla as the Los Angeles Dodgers beat the Milwaukee Braves 6-5 in Game 2 of the NL playoff tiebreaker.

• 1968: Don Wert of the Detroit Tigers hit a ninth-inning RBI single off Lindy McDaniel of the New York Yankees to clinch the AL pennant on September 17.

• 1972: George Foster of the Cincinnati Reds scored on a ninth-inning wild pitch by Pittsburgh’s Bob Moose to end Game 5 of the NL Championship Series and send the Reds to the World Series.

• 1976: Ken Griffey of the Cincinnati Reds hit an infield single to first base with the bases loaded to score Dave Concepcion in the ninth inning of Game 3 of the NL Championship Series, breaking a 6-6 tie with the Philadelphia Phillies.

• 1976: Chris Chambliss of the New York Yankees knocked out the Kansas City Royals with a ninth-inning homer in game five of the AL Championship Series.

• 1978: Bill Russell of the Los Angeles Dodgers knocked out the Philadelphia Phillies with a 10th-inning single to score Ron Cey in Game 4 of the NL Championship Series.

• 1992: Francisco Cabrera of the Atlanta Braves drove in David Justice and Sid Bream with a two-run single in the ninth inning to down the Pittsburgh Pirates in game seven of the NL Championship Series.

• 1999: Andruw Jones of the Atlanta Braves drew an 11th-inning bases-loaded walk from Kenny Rogers of the New York Mets to end Game 6 of the NL Championship Series.

• 2002: Kenny Lofton of the San Francisco Giants hit a single to right field to score David Bell from second base to beat the St. Louis Cardinals 2-1 and end Game 5 of the NL Championship Series.

• 2006: Magglio Ordonez of the Detroit Tigers finished a sweep of the Oakland As with a three-run home run in the ninth inning in Game 4 of the AL Championship Series.

• 2014: Travis Ishikawa of the San Francisco Giants hit a three-run home run in the ninth inning off Michael Wacha of the St. Louis Cardinals to end Game 5 of the NL Championship Series.

After the White Sox victory, the Chicago Tribune feted them the next day for their second pennant in three years. The headlines read “Gleason’s’ Fight Among Hardest in Flag Annals” and “Eddie Collins of White Sox Great Money Player in Game.” But next to the game story on page 23 of the Tribune was a more ominous headline, previewing a World Series that would become the most notorious in baseball history: “Bookies Favor Sox.”