Note: This article was originally published at TheNationalPastimeMuseum.com on March 12, 2018, and is reprinted here by permission.

“This is Chicago, my friend. Anything can happen.”
—Hugh Fullerton, portrayed by Studs Terkel in Eight Men Out

One of the most dramatic scenes in John Sayles’s acclaimed 1988 film Eight Men Out occurs near the end of the movie, as the baseball world is anxiously following its “trial of the century,” the criminal conspiracy case against the Chicago White Sox players who fixed the 1919 World Series.

A trial witness refers to confessions supposedly made by Eddie Cicotte, Shoeless Joe Jackson, and Lefty Williams to a grand jury months earlier. The judge asks for the documents to be brought forward, but the prosecutor shocks everyone in the courtroom with the announcement: “We don’t have them, Your Honor. They’ve been stolen!”

It’s a compelling scene, one that conveys the widespread corruption rampant in Chicago during the Prohibition Era and baseball’s penchant for covering up its misdeeds at any cost. It’s implied that White Sox owner Charles Comiskey and gambling kingpin Arnold Rothstein conspired to lift evidence from the State’s Attorney’s Office in order to sabotage the prosecutor’s case against the Black Sox. There’s just one problem: It’s simply not true.

And neither is most of what you’ve probably read about the complicated legal proceedings in baseball’s biggest scandal.

The grand juries (there were two of them), the criminal trial, and the civil lawsuits involved in the Black Sox saga are some of the least understood aspects about the scandal. But as we approach the 100th anniversary of the 1919 World Series, new access to the trial transcripts, witness testimony, and depositions has helped dispel old myths about what really happened in the courtroom, stories that were often based on faulty newspaper reporting and some creative license by Eight Men Out author Eliot Asinof and many other writers.

Consider the stolen confessions. In 2013, the Lelands.com auction house offered a $1 million reward to anyone who could produce “signed confessions” from Cicotte, Jackson, or Williams. But as Bill Lamb—a retired prosecutor and author of Black Sox in the Courtroom, the definitive story of the scandal’s legal proceedings—has pointed out, those documents do not exist and they never have. Grand jury witnesses, like the three players who admitted their involvement in the plot to fix the World Series, do not normally sign their testimony transcripts. In fact, the Black Sox defendants probably never even saw a copy, because the transcript would have been created by a court stenographer after the fact.

In July 2013, the Lelands.com auction house offered a reward of $1 million to anyone who could produce “signed confessions” from the Black Sox defendants. But no such document exists because grand jury witnesses do not normally sign their testimony transcripts. A copy of Eddie Cicotte’s typed testimony transcript can be seen online at BlackBetsy.com.

One of those transcript copies did, in fact, get stolen from the prosecutor’s office, so there is some kernel of truth to the myth. But this had little to do with a behind-the-scenes partnership between Comiskey and Rothstein—a theory first suggested by New York sportswriter Joe Vila—and more to do with a contentious political rivalry following a Republican Party landslide on Election Day in 1920.

Months before the Black Sox trial even began, Robert E. Crowe, the incoming state’s attorney of Cook County, discovered that the original transcripts of the players’ grand jury testimony were missing from the files his predecessor, Democrat Maclay Hoyne, had left him. (Hoyne’s secretary, George Kenney, is believed to be responsible for the theft.)

But as Lamb explained, this was “more of an office embarrassment than a threat to the Black Sox prosecution. . . . As soon as the theft was discovered, prosecutors had the grand jury stenographers recreate the stolen grand jury transcripts from their shorthand notes. These transcripts were later read aloud to the jury during the course of the trial” in July 1921.

The “stolen” confessions, long since found, were admitted as evidence by the judge inregular fashion, not with the kind of dramatic reveal that shocked jurors and spectators, as portrayed in Eight Men Out. This entire incident had no effect on the jury’s decision to acquit the Black Sox—except perhaps for the fact that reading the redacted testimony transcripts into the record proved to be so tedious in a stifling-hot summer courtroom that the jury might have stopped paying attention.

The transcripts later resurfaced during a civil lawsuit for back pay filed by Shoeless Joe Jackson against the White Sox, but then they disappeared for good. Now that they were of no use to prosecutors, perhaps they were boxed up and forgotten when the State’s Attorney’s office moved a few miles away to California Avenue in 1929. Or maybe they were just lost to history. By the time Asinof started his research for Eight Men Out in the early 1960s, the transcripts were nowhere to be found in the Cook County Criminal Courts Building or anywhere else. His only access to the Black Sox trial records was what he found printed in dusty, decades-old newspapers, which often mischaracterized what was said in the courtroom. Depending on which paper you read, you might come away with a far different impression of what actually happened during the trial.

A partial copy of the legal transcripts would not become available again until 1988, when the prestigious international law firm that had once employed White Sox team counsel Alfred Austrian released its copy of Jackson’s grand jury testimony in conjunction with the release of the film Eight Men Out.

In 2007, the Chicago History Museum acquired a large collection of documents related to the Black Sox Scandal. Among these papers were the long-lost transcript of Lefty Williams’s testimony and other records from the criminal trial. The testimony of Eddie Cicotte—the first player to speak under oath to the grand jury—has not survived intact, but a significant portion of his testimony was preserved in his 1924 deposition for Jackson’s civil lawsuit against the White Sox. A private copy of those records are held by the Chicago Baseball Museum.

Bill Lamb’s expertise and his experience in the courtroom, along with the work of other Black Sox historians who have combed through the newly accessible legal records, have enhanced our understanding of what really happened as the Black Sox cases wound their way through the judicial system.

In popular culture, the Black Sox criminal trial has been portrayed as a farce, a miscarriage of justice plagued by prosecutorial incompetence and legal shenanigans. At best, the trial is seen as a symbol of corruption in scandal-ridden Chicago. At worst, it’s part of a cover-up perpetrated by the highest powers in baseball and the underworld figures who controlled the players and even the lawyers, too.

The myth of the stolen confessions is one of the central tenets to that story, popularized for the last half-century by the success of Eight Men Out. In the film version, John Sayles, portraying the sportswriter Ring Lardner, says after hearing the jury announce the not-guilty verdict, “That was a greater fix than the Series.”

But we know better now. We know what the players actually said under oath, we know how the confessions were stolen and how they were used at trial—and we know why that million-dollar reward will never get paid out. 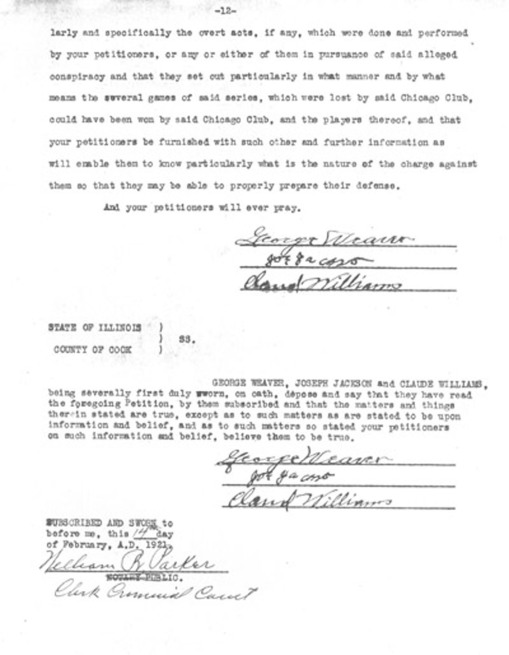 The Black Sox players did not sign their “confessions” (grand jury testimony transcripts), but Buck Weaver, Joe Jackson, and Lefty Williams did sign this affidavit submitted by the defense to grant a bill of particulars, which requires the prosecution to clarify in writing the charges brought against the accused. Black Sox historian Bill Lamb notes, “These affidavits/certifications were significant historically because they constituted a formal repudiation by Jackson and Williams of their grand jury testimony.” (BlackBetsy.com)