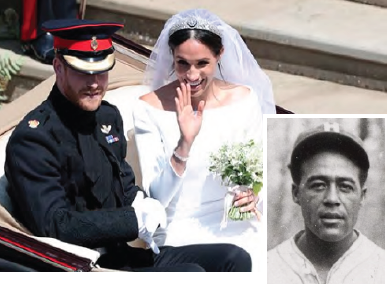 The Royal Wedding between Prince Harry and American actress Meghan Markle, above, on May 19, 2018, had a baseball connection: Markle’s great-great uncle was a Negro Leagues outfielder named Bill “Happy” Evans, who played at least nine games against the banished Black Sox players during the 1920s while with the Gilkerson Union Giants. (Photos: Kensington Palace and National Baseball Hall of Fame Library)

The Chicago White Sox’s connection with “Prince” Hal Chase, the notorious game-fixing first baseman who served as a go-between with gamblers during the infamous 1919 World Series scandal, has been well documented for nearly a century. The Black Sox players’ connection with a real prince, and the newest member of the British royal family, was only recently uncovered.

A story by Hugo Daniel that appeared in London’s Daily Mail on May 18, 2018 — the day before the Royal Wedding between Prince Harry and American actress Meghan Markle, now the Duke and Duchess of Sussex — revealed that Markle’s great-great uncle, Bill “Happy” Evans, was an accomplished player in baseball’s Negro Leagues for nearly two decades.

A fleet-footed center fielder and shortstop known as the “Gray Ghost,” Evans played alongside some of the greatest figures in the Negro Leagues, including Hall of Famers Josh Gibson and Oscar Charleston, his teammates with the Homestead Grays in 1930-31, considered to be one of the strongest teams in black baseball history.

Evans began his professional career in 1920 with the Gilkerson Union Giants, a team that was a founding member of Rube Foster’s Negro National League that year. The Union Giants, based out of Spring Valley, Illinois, traveled throughout the Midwest playing more than 100 games every summer against amateur, semipro, and both white and black professional opponents. As Negro Leagues historian Scott Simkus has written, team owner Robert Gilkerson “found a niche traveling to small country towns where citizens were starved for live entertainment. … [They] were one of the best ‘minor league’ black teams during the era of segregated baseball.”

In the summer of 1921, Evans and the Union Giants found themselves playing a game in Chicago against the South Side Stars — which included five of the suspended Black Sox players. Happy Felsch, Chick Gandil, Shoeless Joe Jackson, Swede Risberg, and Lefty Williams had formed a makeshift team to play ballgames while they were waiting for their criminal trial to begin a month later. They encountered some resistance at first from some fans and local politicians, but their first game on Sunday, May 8 against a city league team, the Aristos, drew a reported attendance of 6,000 and another capacity crowd turned up on May 15 against a semipro team from Omaha, Nebraska.

One week later, on May 22, the Union Giants came to the Black Sox’s home park at East 75th Street and Greenwood Avenue on the South Side. Unfortunately, no newspaper recaps or box scores are available from this game, but in a 1972 interview with author John Holway, Evans related his memories of playing against the Black Sox:

We played the Black Sox two or three years when I was with Gilkerson’s Union Giants in Illinois, and I learned a lot from Felsch, Weaver, Swede Risberg, Chick Gandil, Joe Jackson, and Eddie Cicotte — I hit Cicotte pretty good. They formed a team after they were barred from baseball and barnstormed with us. There wasn’t a great deal of difference in our scores; they would win sometimes and we would win sometimes.

I’ve held Happy Felsch’s head in my lap, with him half drunk, and Buck Weaver, and saw those big tears come out of his eyes. ‘Bill, what can I do? You can’t fight them. How could I throw the games when I hit .300 in the Series?’

Now Joe Jackson was an ignorant man, who had lost the only thing he knew how to do. He really goofed. He could no more throw a ball game, but he was involved, he knew about the gambling.

I have fought for this all my life: If anybody is deserving of the Hall of Fame, I think they should put in all of those people who have paid every penalty that a man could pay. 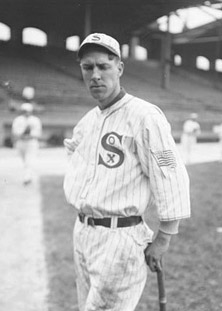 Evans’ recollections first appeared in a 1975 magazine article and in Holway’s 2010 book Black Giants. While there is no clear evidence that he ever faced Eddie Cicotte or that their teams barnstormed together, Evans and the Union Giants did play at least eight documented games against the independent Rochester (Minnesota) Aces in 1923, when Swede Risberg was on that team. Evans did not record a hit in eight at-bats against Risberg as a pitcher.

In 1924, Evans moved on to Rube Foster’s Chicago American Giants and he also played for the Homestead Grays, the Indianapolis ABCs, and several other Negro League teams until retiring in 1937 and beginning a career in the aerospace industry. He married Tennessee native Lillie Ragland — whose older brother Steve was Meghan Markle’s great-grandfather on her mother’s side — and they moved to Los Angeles in the 1950s.

Lillie Evans became a pioneering real estate agent who was elected as the first black director of the Los Angeles Realty Board. Although Bill “Happy” Evans died when Meghan was 5 years old, she knew her great-great aunt Lillie well, according to a Daily Mail interview with Evans’ grandson, Bill Evans IV, on June 4. Lillie Evans died in 2004.

“They were crossing that color line and doing great, great things in a time when there was racism and segregation but they were able to bring things together and I see that in Meghan and in Prince Harry, they are going to do fantastic and wonderful things,” Bill Evans IV said.