This article was originally published in SABR’s Black Sox Scandal Committee newsletter in June 2017. Click here to read the article in its original format (PDF). 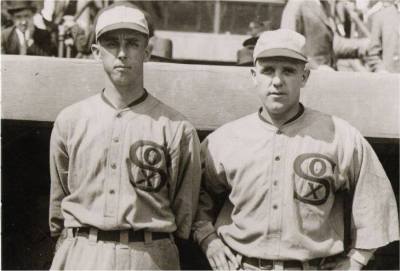 One of the lingering questions about the 1919 World Series scandal is how exactly the name “Black Sox” came to be associated with the Chicago White Sox.

The most common, and straightforward, explanation is that the shameful name became prominent only after the scandal was publicized in the fall of 1920. The Chicago Tribune’s first reference to the phrase “Black Sox” in connection to the team came on October 4, less than a week after Eddie Cicotte and Shoeless Joe Jackson testified about the fix to a Cook County grand jury.1

But rumors persist that the Black Sox name was bestowed a few years earlier, because of the team’s reputation for wearing dirty uniforms on the field. In Eight Men Out, Eliot Asinof blamed owner Charles Comiskey for his cheap ways: “His great ball club might run out on the field in the filthiest uniforms the fans had ever seen: Comiskey had given orders to cut down on the cleaning bills.”2 Nelson Algren, who had followed the 1919 White Sox as a boy in Chicago, later wrote in The Last Carousel: “Eastern fans, indeed, began jeering Mr. Comiskey’s players as ‘Black Sox’ before that appellation signified anything more scandalous than neglecting to launder their uniforms.”3

In 2005, the authors of the best-selling book Freakonomics, Stephen J. Dubner and Steven D. Levitt, offered a reward to anyone who could come up with hard evidence to support the “dirty laundry” theory.4 No one could.

According to Bill Lamb in his book Black Sox in the Courtroom, the real genesis of the “dirty laundry” theory came from the Black Sox’s defense lawyers during their criminal trial in 1921.5 It was one of many tactics used to discredit Charles Comiskey and evoke sympathy for the players with potential jurors. (Another defense strategy — which Asinof highlighted in Eight Men Out — was to accuse Comiskey of under-paying his players and reneging on promised bonuses, a theory that also falls apart under closer scrutiny.)

Historian Bob Hoie says the only contemporary reference anyone has found to the White Sox’s unclean uniforms prior to the scandal came in 1918 — when the team celebrated its World Series championship with a pennant-raising ceremony on June 11 at Comiskey Park.6 It was a hot and windy7 day, and by the time the White Sox completed their 4-1 win over the Boston Red Sox, their white home uniforms were likely drenched with sweat and dust. When the players showed up to the ballpark the next morning, they learned “their domestic toggery was delayed at the laundry … [so] the champions performed in their gray road uniforms.”8 They also wore the grays for the series finale on the following day.

There are no known photos of the White Sox’s June 12-13 games against Boston, and only one grainy photo (which appeared in the Chicago Daily News) from the June 11 celebration.9 But wearing the gray uniforms was clearly a one-time episode, well documented by all of the Chicago newspapers, and the team went back to their normal home whites when the Washington Senators came to town on June 14. The phrase “Black Sox” was never mentioned in any of the Chicago papers at the time and it seems extremely unlikely this could have been the origin of the nickname.

In this photo published in the Chicago Daily News, Chicago White Sox players raise the American flag and a pennant celebrating their 1917 World Series championship during a pregame ceremony on June 11, 1918, at Comiskey Park. Their uniforms were delayed at the laundry overnight, so they wore their road gray uniforms at home for the next two games. Some writers have speculated that the Black Sox nickname originated because of their ‘dirty laundry’. (Author’s collection)

However, the Black Sox name did come up at least one other time before the scandal.

During spring training in 1920, as the White Sox were making their way north, they stopped in Little Rock for an exhibition game on April 6 against the minor-league Arkansas Travelers, led by future Philadelphia A’s star Bing Miller and Native American pitcher Moses “Chief” Yellow Horse. A reporter for the Arkansas Gazette noticed the White Sox’s dirt-stained uniforms and remarked: “Unless the Chicagoans send their hose to a laundry pretty soon, some joker is going to suggest a change in name from White Sox to Black Sox or Dirty Sox.”10

This, too, was an innocent wisecrack. But unbeknownst to anyone watching the game, by the time the season was over, the White Sox would be associated with the Black Sox name forever.

7 The game-time temperature was 92 degrees with wind gusts of up to 31 mph, according to the weather report in the Chicago Tribune the next day.

9  The Chicago Tribune, Chicago Daily News, Chicago Herald-Examiner, Chicago Evening American, and Chicago Daily Journal all reported on the White Sox wearing their road gray uniforms for the June 12-13 games against Boston, but no photos were published in any of those papers, nor in the Boston Globe or Boston Herald. A search for a higher-quality reproduction of the Daily News photo at the Chicago History Museum also turned up empty.